Is Obama's proposals to control college costs for students and families – really effective or not? 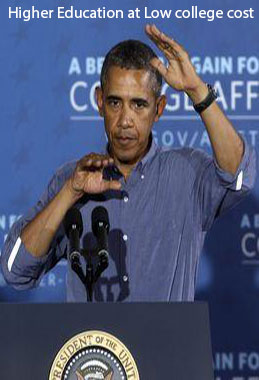 It's been more than a week that president Obama announced the proposed education plan about college cost - to be implemented in coming years - but it seems that Americans and specially traditional educationalists are not in sync with suggested plan of action. The plan has been in headlines of articles - receiving a lot of apprehension - making us to believe that proposal was prepared without taking these educationalists and people of America in circle of trust. Everyone has started putting across their reasons for being skeptical about new plan including; College costs - what does Obama want to do? Is Obama's proposals to control college costs for students and families - really effective or not?

Schoolanduniversity.com has been on a constant watch to keep their students abreast latest developments. We have tried summarizing some of the current questions - current events -views and answers to entire scenario from daily newspapers - online world news channels about Obama's college tuition plan.

If Obama succeeds in implementing this plan - a separate $ 1 billion dollars is what he intends to spare as an incentive for participating colleges to maintain their high education - low tuition cost budgets. We all are aware that American government shells out approx $1.5 billion dollars every year to colleges as Federal student aid - and it is obvious that schools and colleges not participating in this plan will have to lose out on this Financial Aid, making it nearly impossible for them to survive. Students will be affected but not to an adverse extent as the right to choose school and college of their choice is still with them. Only difference - if the plan is implemented successfully - would be that Better Performing Colleges would be rewarded higher aid which will reduce gradually for schools with low performance - hence it is in hands of the students to decide whether they would want to sail with the stream of low college cost plan & selecting appropriate school or college or university, to get Higher Education at low tuition costs or the other way round.