"Record Breaking Bachelor's Degree Attainment" quotes Census Bureau Reports,
March 2011 has been the Year first time ever in the history of America that approximately 30 percent of American adults who are 25 and older have attained a bachelor's degree as their minimum educational qualification as compared to 1998 in the recent past where less than one third of the population in this age bracket acquired this standard of academics.

The overall ratio of people with a bachelor's degree increased from 26.2 percent to 30.4 percent.

This happens to be a very important achievement in the history of United States. The job prospects and money earning opportunities and capacity will increase leaps and bound for those with further education and especially for those individuals who have attained a bachelor's degree.

What is a bachelor's degree?

Bachelor's degree in the United States is typically crafted to be attained or accomplished from any online and on-campus 4-year colleges and universities of full-time schoolwork or lessons. Engineering and Architecture are from the list of few of the programs that might range up to five years. It is been observed that some of the best online colleges and universities allow motivated learners to attain this degree in lesser time frame of about three years through summer schools. The ealier accomplishment of syllabus the earlier you may get high paying jobs.

Further Education above the high-school level may be separated into at least two sections for better understanding, usually known as the undergraduate and graduate study. Undergraduate study is the one with enhanced specialization as compared to secondary or high school and generally upholds the level of liberal arts or general studies. In addition to it, undergraduate study nearly always helps to attain a Bachelor's degree.

However; the Graduate study is more focused, complex and professional. Graduate programs are known to assist in attaining various degrees depending on the field and the level of study.

A few colleges and universities in America follow a different educational segment, also known as known as "honors" or "scholars" degree/program, which is usually rewarded to the top bracket students' basis their GPA which might offer then more demanding syllabus or more self driven tutorials or study assignments instead of the main stream syllabus. These wards are rewarded with the bachelor's degree same as the wards who accomplished the regular syllabus, still the degree provided is with a comment "in a course of honors" on the certificate or the paper copy and the diploma as well. Students attaining the necessities of an honors degree with specific segment/stream/discipline such as Literature and English language will be rewarded with a degree as per the learnings' i.e. BA with Honors in English.

Schoolanduniversity.com has made an attempt to list down the subjects/topics and the fields', where one may get jobs that require a 2 year or a 4 year bachelor's degree; through different types of online bachelor degree programs:

Very common and famous but different bachelor's degree options & majors: The dynamic range of goals and modules leading to a successful bachelor's degree program compel; the educationists and the individual students' to ask some basic questions in assessing the effectiveness of these options:

The Bachelor's degree program as an option has always been attractive, impressive and tempting to the student populace; fully aware of the competitive professional markets in the 21st century.

The ever increasing popularity of the skill based program are promising enough in terms of enhancing the student accessibility, endorse well-timed degree attainment and increased head count would work as a cost effective factor in lowering the college costs while improving the institutional productivity at the same time.

Mostly Bachelor's degrees across America are attained in a span of four years:
Benefits New jobs by education category 2010-20 (projected) 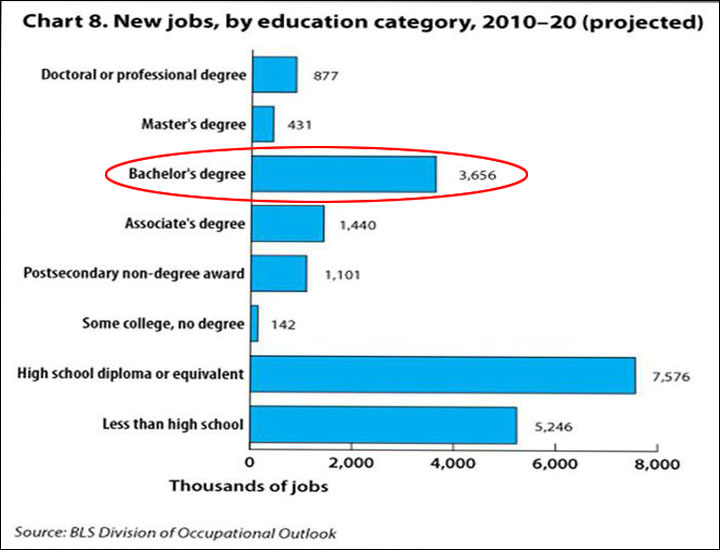